Perhaps, the most unusual puzzle game on Store

It may be a bit arrogant but I decided to entitle this with one of the reviews on my game. There are two reasons for this: the first — such reviews flatter me, I must admit. The second — This is exactly how I’d like players to perceive this puzzle and the whole Box of puzzles. 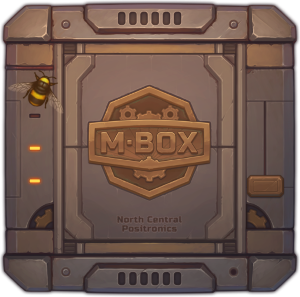 I’ve been developing games in my spare time for 5 years and during this period, judging by the number of downloads, I have made a few games that can be called successful. My personal achievement which makes me proud is the game shown in the picture above. This is not some lootbox game, but is a game full of puzzles, the main idea of which is to bind diverse puzzles with one plot. Most importantly, these puzzles are tricky and require creative, out-of-the-box thinking from players. These are puzzles with simple, yet unexpected solutions.

With that said, 18 months ago, I found a talented artist who was ready to take on the visual part of the game. I myself, in addition to generating ideas, do the programming part and all of the publishing. Below you can view an example of the main menu and the evolution of graphics, from the first alpha version, drawn by me personally, to the sequel of the game that we are about to finish soon.

Before I start discussing the development process, I’d like to drop a few words about the setting of MechBox. I’ll quote the script, if I may call it so. Here, as well as in the game you can see the reference to “The Dark Tower” by Stephen King. Yes, I’m a huge fan!

The Mechanical Box is one of the last fragments of the technology used by the Ancients and still existing in the post-apocalyptic world of the alternative Earth. A high-tech device created with only one purpose: to store and protect an unknown Object inside. To date, the Box is in poor condition: it’s partially damaged and overgrown with moss and other vegetation. There is a warning written on one side which is still readable: “SUBNUCLEAR CELLS MUST NOT BE REPLACED”. 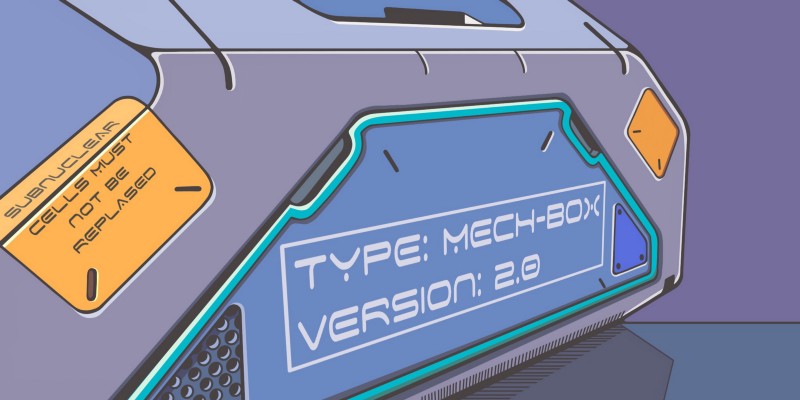 Imagine that you have some kind of a mechanical multi-layered device in your hands. Your task is to unlock it layer by layer, looking for secret switches, picking up passwords and challenging your brain with tricky puzzles — ultimately, to find out — what is inside the Box?

The main feature of this game is not the plot or the secrets of the MechBox. It’s all about the puzzles themselves! I spent many nights googling topics, like “unusual puzzles”, “tricky riddles”, “extraordinary challenges” and doing a lot of reading on these topics… Thinking about puzzles and drawing scribbles and diagrams only I could understand in my notebook. In addition to my search for ideas, I watched a lot of point-and-click quests’ walkthroughs on YouTube(I, especially, like the retro games). This does not mean that MechBox is full of borrowed puzzles. In fact, every idea which appeared to be a success, I rethought, compiled with others, and mixed them with my own created puzzles. An attentive player will even find variations of classic puzzles, such as “Tower of Hanoi” or “Bulls and Cows”, in the game. 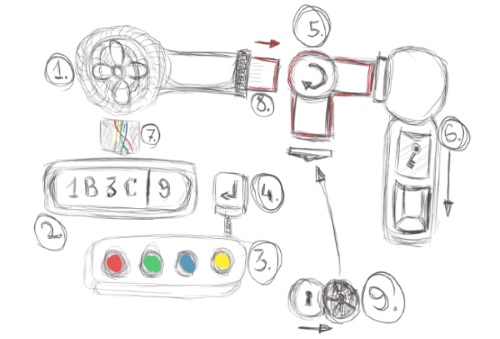 As a result of brainstorming, the first level sketch and description of its mechanics appeared. After discussing the details with the artist the puzzle became a new layer protection system in “MechBox”. Something like this:

I believe that I have been able to collect truly extraordinary puzzles in MechBox. Here is one of my favorites. Players use real-world properties to solve it, which is cool. Turning the phone at a certain angle, we see how the text magically appears, transforming the abstract pattern. Breaking the “fourth wall”, so to say.

Here are two more examples of pattern-finding puzzles that are mind-blowing to people thinking mathematically. The puzzle on the left was found on the Internet, the one on the right is my own creation. In the first one, you have to get a 4-digit code of the sequence of numbers illuminated with a UV lamp, by following the hints on the sheet next to it. In the second puzzle you have to “solve” the formula.

Initially, I must admit that these puzzles are difficult at their core. Not everyone can perceive the numbers simply as abstract forms. Actually, I marketed this game as the «Hardest Puzzle Game Ever» and these are not just hollow words. Despite the short duration of the game, players will find themselves scratching their heads often. This feature is the blessing and the curse of MechBox!

The blessing is that the game is challenging. Even if you try to unlock MechBox with a bunch of friends, the obstacles are tough, and the pleasure of a hard earned victory feels like a real gift, especially when you’re stuck and decide to avoid using the hints in the game that are made for such cases.

In turn, the curse is the casualty most games have spoiled players with. Most are accustomed to consider match-3 games as puzzles, while puzzles in MechBox are a completely different story! My game does not help players to finish it. Even a hint — is just a hint, not a direct answer to solve a puzzle. All this is intended not to deprive you of the joy of self-earned victory. MechBox has no tutorial: no one holds your hand, no flashy buttons or other free-to-play games simplicity. In this, I decided to be consistent to the end and make games as they were made back in the days, when they didn’t assume their players are complete idiots for the sake of good marketing.

By the way, here’s some interesting facts. Just a little over 3% of the players get to the seventh layer. Only an indie developer can afford to go this way, of course. Most larger studios will simplify their games to make them more predictable, just to increase RR (the retention rate). 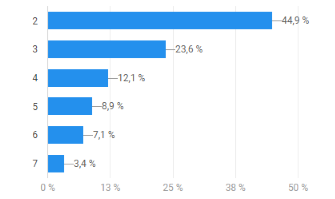 Of course, everything has a price. In store pages of the game there are quite a lot of haters… Some don’t like hardcore puzzles, some can’t understand the logic in some puzzles and immediately write reviews like “The game logic is completely absent! The author wants us to brute-force the password with over 9000 options!” That’s not true. There are hints and logical decisions for each puzzle, they are just well hidden. Yes, you need to carefully examine the level. Any element can have a secret purpose, and it’s necessary to test your every idea, even the most unexpected. You must be able to look at the problem from another angle, and sometimes literally. But that’s the beauty about it! With trivial puzzles it would not be a difficult and interesting quest.

On the other hand, the average Rating of 4.5 stars shows that there are still more MechBox fans than haters! It’s amazing, when one of the players, the father from the Netherlands, tells about him playing the game with his 10-year-old son. And that it’d be great to distribute this game in schools for the development of logic and creative thinking in adolescents. When the math teacher from the UK, not only allows to adopt the ideas of mathematical puzzles from his book, but also sends the signed book itself! Or when a player from Russia (sorry, I forgot your name!) writes a whole story in his blog just because he was THAT engaged in the game. And because of such feedback one should be engaged in game development!

Talking about the technical side, the game is written in Java, using LibGDX engine, mainly because I use this programming language at my work. Besides, I was impressed with the simplicity and lightness of LibGDX. This engine allows to build a game for all of the major platforms. Currently, the game is available on Google Play and in the AppStore. As for PC, there are plans to make an independent spin-off with a completely different engine (and it is Unity, who would’ve doubt), but for now, it’s only plans. We could probably make a web-version of MechBox, though I have no idea what to do with it. Maybe I could put it on itch.io for the sake of promotion.

Architecturally, the project looks like this: there is a base class of a game object. It’s able to display a sprite on screen, apply a mask (when you want to display only part of a sprite), give info on its hitboxes for collisions check, etc. I wrote my own version of this class. Oddly enough, in the retail version of LibGDX there is no such thing. All game objects (combination locks, levers, keys, hatches and other mechanisms) are inherited from it, and then a specific behavior is being added for each element. The same goes with layers. Each layer contains UI elements, hints, quit dialogs, etc. Thus, each new layer in MechBox is an individual class that inherits from the basic layer, where the whole logic of its work is described. I chose such an approach because almost all mechanics and objects within each layer are unique. In other words, each layer is a “game within the game”. Of course, the complexity of the development greatly increases in such circumstances, even though I try, whenever it’s possible, to use at least some elements again.

To date, the first game has been released, and thanks to its success, with more than 2 million downloads and about 100 thousand active players, the sequel followed. In MechBox sequel, I decided to completely change the visual style, change orientation from portrait to the landscape, and a lot of some smaller changes. I believe the sequel should not simply copy successful ideas from previous work, it should always be new development and a step forward. However, many major titles (eg «Heroes of Might and Magic») failed on this approach, let alone us and our game. MechBox 2 is much less popular, even though, for me personally, it seems much more ”mature”, beautiful and consistent so to say. But I’m not complaining, I found its audience, though it’s not very wide.

The popularity of the game is mostly viral. I tried to buy advertising on AdWords, and it did not bring significant results. Although, you could hardly expect that using CPI-based advertisements would be economically feasible for such a game. But at the end of last year, unexpectedly for me, MechBox got in a review in some German YouTube-channel with 700k subscribers. On that day, we have earned more than $1000 — a record of all the time that I’ve been making games! Very exciting, too bad it was short-lived.

But in the end, it’s just like with any creative work — I make games not because of victories or against failures, but simply because I can’t NOT. Thanks for reading, I’ll be happy to answer your questions!

Get MechBox 2: Hardest Puzzle Ever

What secrets remain hidden inside the Box?